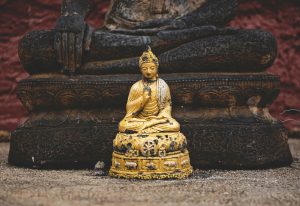 Sometimes in my Desire Map workshops, a participant will share that they are “not a healing feeling type.” And yet, there they are. At the workshop. Which is all about feelings.

I’ve sort of learned to expect this response at least once in a while. While I wouldn’t reduce the vibe of my workshops to a cliché like “kumbaya,” we do, in fact, do a lot of meditation, we talk about levels of energetic vibration and manifestation, we hug it out, and usually, someone cries (you can count on me for that). So yes, it’s safe to say they fall into the category of “healing feeling.” And so how do we end up with the occasional cynic in the mix? The taskmaster among the daydreamers? The realist among idealists? 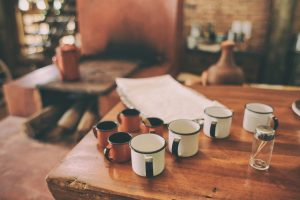 It could be that a friend invited them. Or dragged them along with the promise of martinis afterward. It could be that someone paid for them to go. Or, it could be that they really needed to be there, something deep inside them told them so, and they honored that inner voice.

And so they showed up. They parked some of their disbelief at the door, and some of it came inside, sat tidily on the front end of their yoga mat next to their BPA-free water bottle, and eyed the rest of us with a measure of suspicion.

I totally understand this response. Sometimes the healing-feeling community can be like a big, wet tongue down your throat when all you really wanted was a peck on the cheek. But sometimes, this response comes from resistance.

Resistance to allowing that yes, you have old pain. It’s buried, but it’s there, like a thistle in your gut. Not life threatening, but not life enhancing, either.

Doing healing-feeling work can drudge up a ton of pain. And insecurity. And truths about yourself that might be difficult to face at first. It takes stamina and focus to do the work. And if you’ve been taught all your life that to be strong means to move on, to get over it, to forget about it, to GET IT DONE, well, then, it makes total sense that your world and this other messy world are at odds. The latter might even feel self-indulgent. Annoying. Possibly pathetic.

But I’ll tell you what I know. The folks who hold healing-feeling work at arms’ length are often the ones who need it most. They haven’t moved on. They aren’t over it. They have not forgotten. And it is holding them back from getting it done (“it” being all the super fantastic things that are possible, if you’re open to trusting that the universe has your back).

As humans, we aren’t good at stuffing our emotions down. We actually get over things by feeling—and then objectively naming or labeling—all the feels. Anger. Depression. Guilt. Shame. 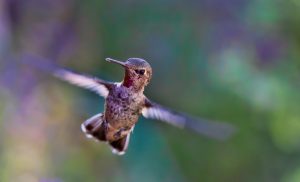 Frustration. Just stating, “I had a shitty childhood,” isn’t enough, and is way, way different from acknowledging how that makes you feel. Still. After 40 years. From allowing in all the feelings that you never stopped to feel about that shitty childhood. From punching a pillow. Having an ugly cry. Writing in your journal. Forgiving that person. From giving yourself grace, and radical self-compassion. And from the staggering freedom that comes on the other side. You will be like a fucking bird with a jet-pack booster between your fucking wings. I know this. I’ve felt this. I have seen it happen in others. In the cynics and the doubters, and in the people who were so, so tired.

My put to you is this, doubting, tired cynical, efficient, capable, strong humans who rose from the goddamned ashes like a phoenix (I’m not saying this facetiously; I believe you and applaud you): don’t write it off. The healing-feeling work. Don’t shut the door on it. Because all the hard stuff you’ve overcome? Your triumphs over adversity? They brought you this far, and you can go farther. You can do more. And you know exactly what I mean, because something deep inside you is telling you so. (Nope, it’s never going to shut up. Not while you still have a breath left, anyway.)

Giving healing-feeling work a try doesn’t mean you have to sign up for a workshop. It isn’t an automatic three-year program (two if you go straight through summers). You can do it by yourself. You can do it with another person (someone with a license or certification of some sort, preferably). Or, you can do it in a group. Come, be the realist among the idealists. We love your spunk. Because my bet—and I’ll put money on this—is that you’re not over whatever it is that you’ve tried so hard to avoid and that you keep telling yourself you’re over. We’re here for you, in our stretchy pants and headbands, ready to listen, to bear witness to your pain, to share your humanity, and hug it out when you cross over to the freedom. 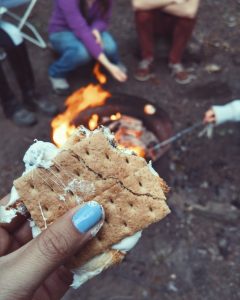 We see who you are, when the pain falls away and pools around your feet. We see your light.

You’ll see it, too. It’s waiting for you. By the fireplace, with a S’mores and a cup of chai. How can that be a bad thing? Right?

I thought so. Kumbaya, brothers and sisters. We are you. 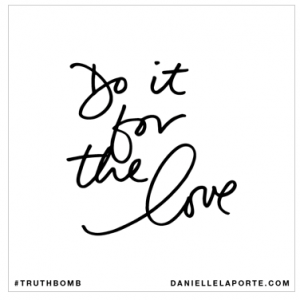 I love Danielle LaPorte and her work. I got turned on to Danielle in 2011, and immediately subscribed to her blog. Then I started listening to her recordings; the woman has a voice like melted chocolate. I packed the Credo for Making It Happen mp3 with me to a writers’ conference in 2012 and played it before I made my first-ever book pitches to literary agents. (It worked.)

I attended a different conference in 2013–a great one put on by the Women in Biz Network–where Danielle presented twice in two days. Not only did her wisdom not disappoint, it deeply resonated. (Also, the next week, while shopping at Nordstrom, I found the exact same top she’d worn on the first day. I tried it on, but I didn’t buy it. That would have been creepy. It was a nice top. I can see why she likes it.)

I read Danielle’s book The Desire Map and did the workbook in 2014. More deep resonance, followed by a permanent and transformational shift in my being. And in 2015, I became a licensed facilitator for The Desire Map Workshop. (Every now and again, I squeal out loud.)

I came to this work honestly: I didn’t like how I felt more often than I was comfortable accepting. That was the bottom line. The other bottom line? The whole point of life is to feel good. Otherwise, what’s the point?

In that way, The Desire Map has been revolutionary for me. This book isn’t just intellectual theory; it’s a catalyst for change. It helped me get clear on what was working and what wasn’t. I figured out how I wanted to feel. Every day. And, for the first time in many, many years, I declared that yes, my feelings actually were the best navigation system for designing my life.

So now, as a facilitator and a friend, I ask you this: How do you feel? And, how do you WANT to feel?

Some more good questions: Do you have blocks to move? Self-limiting beliefs you need to burn? Huge, awesome, juicy things you’re jonesing to manifest in your life? Then maybe The Desire Map is for you, too.

First up, an in-person workshop in Seattle on Feb. 21 & 22, 2015. In the future, I’ll be considering other locations and/or a virtual workshop. You can also email me at laura at zerapress dot com. I want to be of service, so don’t be shy.

I don’t believe we’re on this planet to just pass through, or to let our potential go unrealized. I DO believe that we each have the power to design a life so right for us that when we lay our head down to sleep each night, our hearts are full of joy and our souls are content. It’s what I want. Is it what you want?