After the first group of Polynesian settlers on Pitcairn Island suffered extinction in the 15th century, it wasn’t inhabited again until mutineers from HMS Bounty, along with the Tahitians who accompanied them, sought refuge there in 1790. 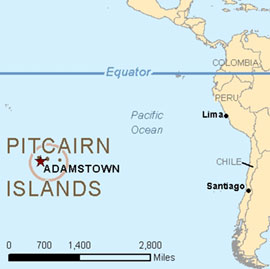 Since then, the population has never exceeded 250, for the past several decades has averaged somewhere in the 50s, and all are from just four main families. As a British Overseas Territory, it is reported to be both the least populous jurisdiction as well as the smallest democracy in the world. Pitcairn Island has neither an airport nor a seaport; the islanders use longboats to ferry people and goods between ship and shore through Bounty Bay as its one small harbor is so shallow that only small boats can dock. The rest of the Pitcairn island group aren’t inhabited, making Mangareva Island and Easter Island the nearest population bases, at a mere 540 and 2065 kilometers away, respectively. END_OF_DOCUMENT_TOKEN_TO_BE_REPLACED