I found a really compelling post from Danielle LaPorte in my inbox yesterday called “The Courageous Minority.” It talks about why settling for mediocrity over fulfillment is poison for your soul. I totally agree. Totally. Love love love Danielle LaPorte. I’m also LaPorte’s target audience. And as a person with a mood disorder who survived a traumatic childhood, I want to take a moment and do a few add-ons to what she says about mediocrity, and to consider the non-linear association between “safe” and “mediocre.”

Most people will proceed as planned. They’ll stay quiet, suppress their doubts with rationality. They’ll make the choice to save money, save face, not rock the boat. Don’t want to disappoint people. There’s a lot on the line. I said I would, so I should.

Safe. The road to mediocre is always really…safe.

And in terms of fulfillment, ‘safe’ is really, really dangerous.

The vital rallying cry here is that if you feel like you’re not living your best life, then pay attention to that feeling and do something about it. Don’t play safe. Life’s too short to play safe. But, and, however!!! There are also times when you need to play safe, and so don’t beat yourself up about that, either. I say this as a person who is highly ambitious with a perfectionist drive, rooted in the message of “you’re not enough.” I have been through phases where I shat on myself for not being more courageous, even when I was as courageous as I could emotionally manage at the time. Yuck. As Tom Petty says, “don’t do me like that.” 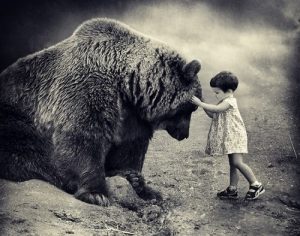 One thing that strikes me as a large factor in courageous-move-making is TIMING. Sometimes it takes a while – three months, three years – to plan a big change. Sometimes you can only juggle one change at a time, and so other things get backburnered while you replant your feet and get steady (or steadier) again. The key is to keep what you want (to risk or change) on your radar. Don’t backburner it on your neighbor’s stove so that you lose sight of it, and start taking small steps toward it, even if you’re not ready to swing the whole deal.

Another thing is SUPPORT. Before you launch into change or risk-taking, line up your support structure, whether that be cash savings, or a back-up place to live, or engaging your posse of friends and family. Courageous people are rarely courageous all by themselves. I was reading how Mark Zuckerberg was recently awarded a Harvard degree, because as a student, he dropped out to run his new project, Facebook. It’s true that few groundbreaking things happen without big risks. It’s also easier to take big risks when you have a big support system. Obviously not everyone is going to have the resources Zuckerberg had when he opted to quit Harvard and roll the dice, but that doesn’t mean groundbreakers have to come from a place of privilege. Don’t forget about the side doors. Go around the gatekeepers. And if you don’t have obvious resources, be resourceful to find your resources. Ahhhhh. Gotcha.

Finally, whatever you decide to do, or not do, when it comes to risk-taking and change, BE TRUE TO YOU. Some people fly on the safe side, and will always do so, and if your feelings are telling you it’s all good, then it’s all good. I remember going through a DISC personality test about 22 years ago, where there are four types identified: Dominant (Active Task-Oriented), Influential (Active People-Oriented), Steady (Passive People-Oriented) and Conscientious (Passive Task-Oriented). None of those types are bad “ratings,” and people in the “conscientious” group may always be happiest in their safe zone. If that’s you, honor yourself. That’s not mediocrity! And think of this: if everyone was a “D” or an “I,” we’d be in a world of chaos! That said, if you are an “S” or “C” and your happy place starts to chafe, please don’t wait until you have a festering blister to explore what that chafing is about.

Finally, I’ll say that the one thing I don’t fully adore from Danielle’s post is the title. I don’t believe courageous people are in the minority. I think that a lot of things we do every day take immense courage and add to our fulfillment. Standing up to a bully. Trusting a stranger. Caring for an ailing child or parent. Parallel parking on a hill. Allowing someone into your heart. Big acts of courage are more obvious than small ones, but give yourself credit for both.

Danielle and I are both Canadian, so it’s only fitting that I leave you with one of Canada’s national treasures: The Tragically Hip, singing their song “Courage.”

Images via Creative Commons license, with “Courage” artwork by Wendy at the Create to Heal blog.