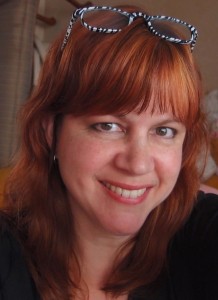 Are female solo travelers crazy? No!* In this interview with travel expert Lisa Egle, she soundly puts all lingering speculation on that to rest, and might very well light the solo-travel fire in you! Lisa is the author of Magic Carpet Seduction, a memoir of off-the-beaten path travel that takes ‘riders’/readers on unique journeys to China, Latin America, Turkey and the Middle East. She’s also the editor/publisher of ChickyBus, a travel blog that focuses on story-telling, photography, random travel moments and humor. When she’s not on the road, she’s home in New Jersey, working as an ESL professor. Her writing has been published on BlogHer and Matador Network, and one of her stories was featured in an article on the Oprah.com blog.

*(I may be crazy, but for other reasons.)

1. The more I get to know you, Lisa, the more I realize that we’re cut from the same Cordura when it comes to our travel philosophy: people-focused, often solo, and off the beaten path. Let me start by asking you what led you to doing your first solo trip, and where did you go?

A British friend, someone I’d known when I lived in Ecuador in the mid-90s, invited me to visit her in Madrid. I’d always been curious about Spanish culture and I spoke Spanish somewhat fluently, so I accepted, figuring I’d plan for a month-long trip so I could travel solo after spending time with her.

Because I wanted a true cultural experience, I joined Servas, an organization (pre-Couch Surfing) that allows travelers to connect and stay with members around the world. After I spent a week with my friend in Madrid and on the southern coast, I set off on my own and stayed in low-budget rooms and in locals’ homes.

I spent several days with a family in Sevilla and went looking for UFOs with an artist in Granada. After Andalucia, I made my way up through Portugal and re-entered Spain in the northwest. I spent a week in Galicia, birthplace of the dictator Franco, which was amazing because it was so different from the rest of the country. There, I stayed with a family in a tiny village and also visited Santiago de Compostela, the capital, before returning to Madrid.

It was an incredible trip because of the wide range of experiences I had—and because of how much I enjoyed traveling solo. I loved that feeling of it being just me, my backpack and a desire to explore and be spontaneous. It was definitely this trip that led me to fall in love with solo travel.

2. People often ask me why I choose the places I do, to which I usually reply, “Why not?” What is your modus operandi for deciding where to go next, and how far off the grid to go? And does your method include magic mushrooms?

Sometimes, I see a photo or video of a country or its people and I get a feeling—usually giddiness—and I know I must go there. That was the case with Indonesia. When I saw the monkey chant in Baraka, the non-narrative film by Ron Fricke, I got goose bumps. The more I learned about the country, the more fascinated I became and the more I wanted to go. A few years later, after a random tweet led me to connect with someone in Sumatra, things fell into place and I went.

In other cases, I choose to visit a country because of my ESL students. This is how/why I went to Turkey. Hearing about their hometowns and cultures made me curious. I started reading about the country, eating Turkish food locally and after a while, decided I had to have the complete experience by traveling there. And I’m glad I did. Turkey is now one of my favorite countries in the world.

Are magic mushrooms part of the decision-making process? No! But for some reason, I often see them when I’m traveling. They tend to be quite abundant in the countries I typically visit.

3. Where are you going next, and why?

I’m not 100% sure—it could be anywhere—but my next stop might be Colombia. It’s always been on my list and somehow, it has eluded me.

I have quite a few students from there, but that’s not the only reason I want to go. I’ve enjoyed salsa dancing for about 15 years now and really want to do it in Cali. The reason: the first people who taught me to dance are from there, so that’s the style I know best. I have no doubt whatsoever that I’ll love it if I go.

4. Do you get the feeling sometimes that people from your home country think you’re crazy for traveling the way you do? What would you say to that?

Absolutely! Some worry about my safety. Last time I went to Mexico, quite a few people warned me about how dangerous it would be. I had to explain that certain provinces are quite safe—and that Baja Sur, where I was going, is one of them—and eventually they understood.

Others can’t believe how much I like to stay with locals who are complete strangers. “But don’t you feel uncomfortable in those situations?” they ask. I explain how welcoming most people are in other countries and how much it enriches travel for me. After a while, it starts to make sense to them.

Overall, most people find my style of travel unique and are intrigued by it. Some have told me that they secretly wish they could do it, too.

5. Have you ever been in a situation where you’ve thought, “Oh crap, I may not make it through this alive?”

Yes—in Mexico about seven or eight years ago. I was traveling from Puerto Escondido, on the Pacific Coast, to Oaxaca, in the mountains, on a poorly maintained bus. It wasn’t the typical large bus; nor was it a mini bus. It was an irregular size, somewhere in between the two.

To my surprise, the driver took the route that the minivans follow (not the longer route that’s safer for big vehicles)—treacherous mountain roads. The way the bus shook and rattled the entire time, I thought it was going to fall apart. Worse yet, the driver drove too close to the edge of the road. Every time he took a curve, I thought we were going to plunge to our deaths. I was terrified the entire night and relieved when we finally arrived.

6. Stray cats and dogs: pet them, or avoid them?

Avoid them. Unfortunately, in many countries, animals are abused, so you don’t know how they’ll react to you. Also, I don’t want rabies. So I stay away from all strays.

7. What’s the most valuable thing you’ve ever had stolen (or lost) on a trip?

Believe it or not, with all the countries I’ve been to (including those with dangerous reputations), the one and only one where I was pickpocketed (twice) was Spain! The first time was in Barcelona, where I was living at the time. I didn’t even see it. I was in a supermarket and I think the man reached into my gym bag. He got some cash and my ATM card and unfortunately, managed to withdraw $300 from my account.

The second time was in Madrid. Two guys ran by and grabbed by backpack-style purse. I had a cellphone inside (with all my friends’ phone numbers, which were not written down elsewhere) and some cash. Fortunately, my passport was in my friend’s apartment.

7. How do you protect yourself from theft (or your own stupidity)? 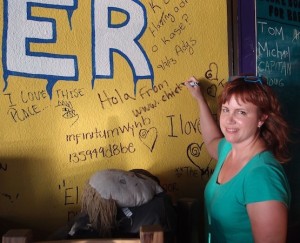 I use a slash-proof waist pack. It’s got special mesh in it, which can’t be cut, plus a trick lock. When I first got it, I even struggled to undo it. I keep my money, credit cards and camera in it. I love it because I never worry when I’m in a crowded city or on a bus or in a bad neighborhood.

I also try not to arrive anywhere, especially a large city, late at night. I also take advice from the locals about which areas to avoid. And although I love to talk to strangers, if I get a weird vibe from someone, I listen to my gut and find a way to break away.

Thank you to Lisa for her willingness to come play on this blog and for being a great global citizen, and to you guys for reading and jumping on for the ride, too! You can keep up with Lisa’s travels by following her on Twitter, Google+ and Facebook.

Questions for Lisa? Ask away! And I’d love for you to share some of your own answers to these questions.