There’s a sweet and special thing about making new friends: no matter how far away they live, you never know when they’ll turn into old friends. A chance encounter or short conversation with someone uncovers common interests or shared experiences and pretty soon, a quarter century has gone by and you’re still sending each other Christmas cards (and now, chatting on Facebook).

I have a few good new-old faraway friends (“NOFFs”). I met one as a teenager in Tel Aviv in 1986 and had lunch with him and his family last year in Massachusetts. Another NOFF is the result of a few boozy days in Airlie Beach, Australia in 1991. I attended her wedding in Frankfurt in 1999 and we’re still in touch. We even share the same birthday.

There’s something else about NOFFs. Perhaps you don’t talk to them for years; we’re all busy, after all. But you never forget about them. Other people wash out of your brain over time; with NOFFs, there are songs or memories or landmarks that always bring them back to you. And it feels good, doesn’t it? Brings a little smile on what might be a grey day. 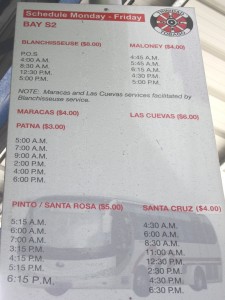 I’m waxing nostalgic because of a delightful old codger I met in Port of Spain, Trinidad in March. I wrote a bit about him already in the post “Trinidad, Where You Can Hug the Bus Driver,” and while I don’t even know his name, he said a few things during our conversation on the bus to spur this post.

It came up that I’m originally from British Columbia, Canada, and this gentleman revealed that he has a friend in New Westminster, B.C.

“Why, I was born in New Westminster,” I said.

“I haven’t heard from him for a few years now. He hasn’t replied to the last several letters I sent. I don’t know what happened to him, if he moved or got sick or maybe passed away.” Then, without missing a beat, he added, “His address is 127 – 8th Street.”

The man in the seat beside me was 74 years old, and his friend in New Westminster would now be 76—any number of events could have occurred to prevent the Canadian man from answering his counterpart’s correspondence. Had I been thinking, I would have asked for both of their names and made an information-seeking pit stop at his friend’s place the next time I was in the area (a subsequent attempt to get a message to him through the kind folks at the Public Transit Service Corporation hasn’t been fruitful). But what stuck with me the most about this exchange was that my Trini bus mate had memorized his friend’s address.

How long had these two gents been friends? I don’t know. How many years had passed since they’d seen each other? I’m guessing quite a few. How many letters had been written? Enough to qualify them as new-old faraway friends, because knowing your chum’s address off by heart is a sure sign that they’ve had an impact on your heart. It’s textbook NOFF. And even though my Trini bus mate may never find out what happened to his Canadian friend, his story served to remind me that frequently the people you meet on the road are the treasures you take home.

Do you agree? Do you have a few NOFFs of your own?

To my Trini friends, if you ever ride the bus from Port of Spain to Maracas or Blanchisseuse and encounter the dapper fellow I’m speaking of in this post, please pass on my warmest greetings. He’s a regular rider on that route, and in his feathered fedora and orange safety vest, highly recognizable. You can tell him that his new friend from Canada is thinking of him.