I favor a populist approach to travel. I’ve never been anywhere I didn’t like, so why try to pick the top tier? Love ‘em all! After visiting Trinidad for six days in March, though, I’m going out on a limb to proclaim that I may have encountered the friendliest people I’ve ever met on this planet. Really. 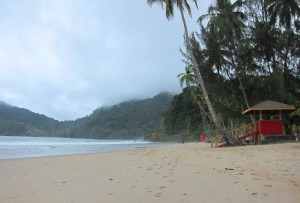 Let me tell you about the day I went to the beach.

After being taught which way to stick out my finger by the lady in the furniture store on the corner, I flagged down a shared taxi and jumped in. The sports updates were just drawing to a close on the radio; I faked righteous indignation and quipped, “They forgot the ice hockey scores.” This brought belly-jiggling peals of laughter from the driver and my fellow passengers. What’s more notable is that it wasn’t the first time I’d been made to feel like a comic genius since arriving.

At the bus station, I stopped at some market stalls to look for nuts. When I couldn’t locate any, I entered the terminal, but not without being asked by the security police if there was something they could help me find. A few minutes later, as I waited near the departure bay, a dreadlocked man in a dirty polo shirt approached me. “You looking for nuts?” he asked, pulling a selection out of a crossbody bag.

He waved in the direction of the entrance. “They told me.”

I purchased peanuts and almonds before taking a second-row seat on the 8:30 bus to Maracas Bay. It wasn’t your average public bus, though. This was a luxury coach, with velour seats and air conditioning. A dapper elderly man sat in the front row on the opposite side, and a middle-aged woman directly in front of me. As passengers boarded, many paused to exchange exuberant greetings with either one or both of them. It was like being at a family reunion full of people who actually liked each other.

I asked the bus driver how long it took to get to Maracas, and he replied, “Not long.” It turned out to be a visually stunning 45 minutes, full of winding roads and lush mountain landscapes. Several of the people we picked up along the way sat in the front to visit with the gentleman for a bit before making their way to the back, and he was happy to hold court. Dressed in a brown pin-striped three-piece suit, his lapels were adorned with political party badges and he wore a medal around his neck. His brown fedora had a lime green feather coming out one side, and he carried a large briefcase. On top of his suit, he sported a neon orange safety vest. A character, indeed.

Intrigued, I decided I wanted to visit with him, too. When I moved up a row to occupy the seat next to him, he’d dozed off. “Just touch his arm, he’ll wake up,” the lady opposite us said. I did, and he did. We had a lovely visit, of which I plan to write about at a later date.

Rain came down within 30 minutes of my arrival at the beach. I didn’t want my backpack to get soaked, so, despite a sign that read, “Lifeguards Only,” I ran into the hut. The lifeguard joined me there after a spell, not at all bothered by my camping out. In fact, he taught me how to spot rip currents.

I took shelter in his hut three or four more times that day before giving up hope that the sun would stay put and going across the street to get lunch at Richard’s Bake and Shark. Somewhat of an institution in Maracas Bay Village, other bake and sharks have popped up around it, but I’m partial to Richard’s because they gave me a gigantic piece of shark to taste before I ordered. And just what is

bake and shark? It’s more than a fish sandwich, it’s a delectable treat. You build your own, and can add tamarind sauce and coriander sauce and veggies galore. Totally delish.

There was only one afternoon bus back to Port of Spain, at 3 pm, so I joined six Trini women who’d also been on the morning bus and we waited on the side of the road (there are no official bus stops). When it pulled up, the driver apologized and said, “The bus is full and it’s against the rules to have standing passengers.”

“But the next one doesn’t come for four hours!” one of the women said. She stood in the doorway of the bus and negotiated on our behalf, and the next thing we knew, she was waving us all over to board. The first on, the woman handed in her ticket and exclaimed “Thank you so much for not leaving us out there!” Then she hugged the driver. I was next, and thought, “What the heck?” I hugged the driver, too.

When some students got off down the road, we found seats at the back. A jolly drunk boy in the last row provided the entertainment, singing practically the whole way (until he had to get off to urinate in an empty parking lot). Back at the bus terminal, I chatted with the driver for a couple of minutes before leaving, then crossed the street to the shopping district.

Every time I left a shop, even without purchasing anything, the sales staff were just as friendly to me as when I’d entered – “Thank you, bye, enjoy your evening!” In the end, I bought only souvenirs, even though I dreamed of being 19 and six feet tall so I could have purchased these sweet kicks.

As it was my third day on the island, I’d already stumbled onto the ‘must walk’ street on the route from downtown back to my guesthouse; the happy path, one might say. Because just in case I wasn’t feeling welcome enough in Trinidad, or had a case of the blues (is that even possible in the Caribbean?), there were these two fellows (later, their owner let out a third to come join the party), possibly the friendliest security spaniels in the world. There I go again with the favoritism. I may just have a little crush on Trinidad.