I’ve come to realize that my day isn’t quite right if neither of the two visiting neighborhood cats lingers for a nap outside my office window. The little white one is a feral barn cat I’ve named ‘Bug Hunter Kitty’ and the black and white gets called ‘Black-and-White Kitty.’ (Wait, wait, before you call me out for being unoriginal, know that I’ve named two of our resident squirrels ‘Jesus’ and ‘Magdalene.’)

These two kitties make me lovingly remember a feline friend from 2007, when I lived in Cameroon for six months and worked for the Grameen Foundation. The primary critters that hung out at my first apartment  in Yaoundé were cockroaches, so halfway through my assignment I moved a few blocks down the road to a basic but comfortable garden suite.

My place was one of two units beside the main house and my new landlord Patrick was a raging alcoholic who broke in while I was at work and stole the good chocolate my husband had sent in a care package. Somewhere around 40 years of age, Patrick had a 20-year-old girlfriend, a three-year-old daughter and a tiny black cat. “That’s Bamboo,” he told me when I first moved in. “She’s crazy, she won’t let you touch her.” Bamboo was so small she looked like a kitten. “She comes and goes, sleeps in the bushes somewhere. I don’t feed her; she eats what she finds,” Patrick said. 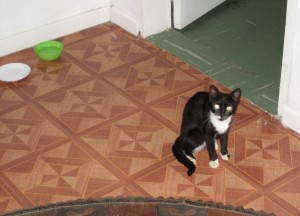 Never one to give up on an animal, whenever Bamboo was around I would sit on the grass, motionless. After a week or so, she started coming closer to check me out. Refraining from attempts to pet her, I just talked while she walked in circles around me. My next move was to prop the apartment screen door open and wait. Sure enough, her little black face popped up in the doorway and after a moment, she took tentative steps into my suite. I went to the kitchen and poured a bit of milk on a saucer for her. She lapped it up so quickly I worried she might get sick, and so for a few days, we gradually built up the amount she’d consume. 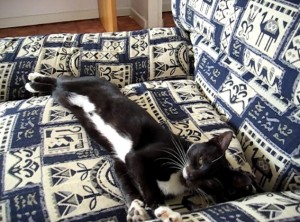 I suspected she wasn’t finding much food outside in the garbage heaps, and stopped at the grocery store one night after work to look for cat food. Purchasing an unfamiliar brand of dubious quality, I figured it had to be better than trash. Bamboo agreed. She ate with gusto, and then, began to stay around for a rest on my overstuffed chairs after her meals. Soon, she looked like she belonged there.

The front door of my apartment was a steel slab with two window panes at the top, and while I slept with the door shut tight at night, my windows were always open. A fairly good judge of time, Bamboo would wait outside my bedroom window until she heard me rise, then climb the screen door to get my attention. I walked out into the living room one morning to see her face slightly higher than eye level—about six feet up—and peering through the window of the steel door. “Let me in,” she was saying, even though I couldn’t hear her through the slab. My screen door was full of evidence of Bamboo’s persistence.

As she was prancing around the living room one evening, her tail erect, I noticed worms. My next challenge was to find a vet in Yaoundé, no easy feat given that the urban planners stopped short of putting up street signs. With scant directions, I drove my pick-up truck across the city until I found a clinic, then purchased enough deworming pills to last a year.

Her ‘rehabilitation’ had taken less than a month, and Bamboo was like a different cat. If I sat outside reading on my porch, she played in the garden, pouncing on anything that moved. If I was inside, she was either on a chair next to me, or eventually, on my lap. In a place where I had few friends, she eased my loneliness and brought me joy, that tiny little creature. We were so grateful for each other.

I didn’t bother trying to tell Patrick that he was wrong about his cat. Instead, when I left Cameroon, I took Bamboo’s food and worm pills over to the unit next door to me and gave them to Julio, a Spanish speaker from Uruguay who worked for the United Nations and still had a year left on his contract. “Take care of her for me, please,” I implored. 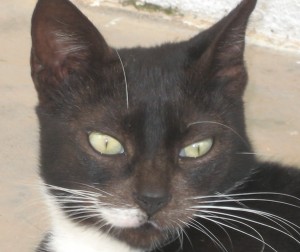 “I will,” he said, looking at me and smiling ever so slightly. “I will make sure to feed her.” His eyes had a look I understood from experience, that of a person who has been separated from their loved ones for too long. Even though our ability to communicate was limited, I should have explained to Julio that he would feel better soon.

Do you have a story of an animal you befriended while you were on the road? Or one who makes you smile every day at home?