Everyone would agree that it can really take the wind out of your sails when you spend a lot of time around someone who undermines you, but a recent workplace study published in the Academy of Management Journal tells of an interesting twist. An interactive model was developed to test three types of employee relationships within a police department in the Republic of Slovenia: relationships with social support, ones that were undermining and ones with a mix where someone was both supported and undermined by the same person.

Without a journal subscription, only an abstract of the study is available, however Wharton professor Adam Grant distilled the outcomes in his LinkedIn post this week, titled “What’s Worse Than a Coworker Who Undermines You?” And the answer to Grant’s question? The study showed that the most negative outcomes were reported in a situation where a coworker both undermines and supports you. The Jekyll and Hyde, as Grant calls it.

Psychologists have also studied the Jekyll and Hyde effect on everyday relationships. One study (here’s the abstract) found that the higher the number of ambivalent relationships a person had, the more likely they were to be stressed and depressed. It’s easier and more straightforward to process emotions toward someone whose behavior is consistent. When they’re not, neither are your emotions. The “love/hate” feeling that’s often associated with ambivalence is experienced as psychologically unpleasant when the positive and negative aspects of a subject are present in a person’s mind at the same time, according to ye olde wiki. In one of the study’s testing, this manifested as higher heart rates during anxiety-provoking tasks.

For those of us who grew up in an unpredictable household, some light bulbs may be going off right about now. Here’s the way I’m connecting the dots: when you’re not sure how your parent is going to behave — something that brought hugs on Monday brings a raging temper on Tuesday, as a friend likes to say when remembering her mother — your body kicks into safety mode. The fight-or-flight response is your nervous system’s survival strategy. This creates elevated levels of stress and anxiety. And now, years later, your body may still be physically reacting that way. Our cells have strong memory. The unpredictable relationship that caused your nervous system to go into overdrive in the first place left a lasting impression on your body, even if your mind recovered. 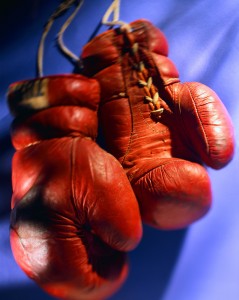 This clicked on like floodlights on a football field for me earlier this month. I went to an acupuncturist to seek relief for my allergies. After she checked out my tongue, hands, feet and belly and took my pulse about sixty-three times, she said, “Your body is ready to fight.” But I was lying on a bed in a dimly-lit room with soft, relaxing music playing in the background. Ready to fight?!? Yes. And it has been for decades.

Over the years, I’d kind of started ignoring aspects of my ‘wound-up-ness’ and accepted it as being my normal. My rational, attentive self knows that it’s not normal, and besides, it doesn’t really feel all that good anyway. Plus, overworked adrenal glands can have long-term ill effects on overall health, so I’m tuning back in to what my body is telling me and, more importantly, working to unwind it. Ambivalence, be damned. I’m a lover, not a fighter.

Did this post resonate with you? Have you been on a similar journey? I invite you to share your thoughts.