After the speeding, singing shared taxi from Suriname to Guyana on March 10th, I checked in at Georgetown’s Tropicana Hotel, the only place I could find on the internet that advertised itself as backpacker accommodation. For $22 USD a night, it was nice enough, but unfortunately, aside from one young man who looked in my direction through mirrored aviator sunglasses without moving a single facial muscle, it didn’t have any guests with which to trade information.

I took a well-deserved shower, during which water accumulated up to my ankle bones and stayed there, then went downstairs to talk to the restaurant’s bartender and get the skinny on the neighborhood. See, when I landed in Suriname a week before, two options had been on the table: go to the Amazon jungle there, or go in Guyana. Each country offers a very different experience (I’ve posted a comparison here), but I didn’t have time to do both. Given my budget and time allotment, I chose to do it in Suriname, which meant that the three nights I had left for Guyana would all be spent in the capital city.

Most people don’t hang around in Georgetown.

“So what’s around here for shops?” I asked the bartender. “I need to get some bottled water and stuff.”

He looked at his watch. “There’s only one shop open on Sunday, and it’s two blocks over. But you should hurry. This neighborhood isn’t healthy.”

“Healthy?” I waited for him to tell me that zombies were taking over the streets.

“You don’t want to walk around alone, especially at night. If they see a foreigner, they will just jump you.” And then eat my brains, I guessed. 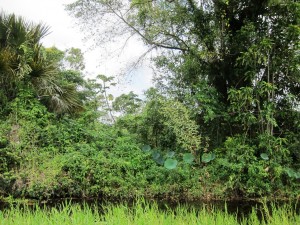 My inclination to explore the city on foot smushed, the next morning, from the air-conditioned respite of the Oasis Café, I contacted three tour agencies and inquired about day trips. The “less expensive” tours ($125-160) weren’t available due to lack of people – a problem when traveling in places with light tourist traffic. I inquired about bird watching in the Guyana Botanical Gardens. “The gates open at 6 and that’s the best time to see birds,” the tour agent told me, “but don’t go alone. There aren’t any people around and you could get mugged.” Being me, I slept in until 7:30 and then went alone, taking nothing but my camera, $10 and some lip balm. 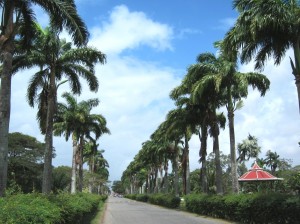 The gardens were cut down the center by one long, shaded paved road with few footpaths, but strolling through them was entirely pleasant. Locals passed by infrequently, usually either on bicycles or in cars, and one fellow pulled up next to me and warned that it wasn’t safe along that road. I never saw anyone particularly threatening, though, and if someone seemed a little dodgy, I stared them down with my zoot-zoot laser eyes. 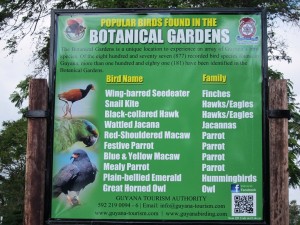 At least two dozen bird species also crossed my path, including this very diligent woodpecker I captured on video. The bird songs, breezy trees, abundant water lilies and well-placed benches for sitting, watching and listening almost made me forget I was in the city. I was less fond of the litter strewn about everywhere, and slightly annoyed when I observed a garden employee using the shallowest of shallow baskets to collect it. 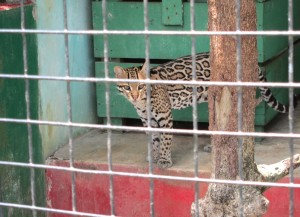 At the end of the gardens lies the zoo. For the $2 entry fee, I received good value for money with regard to the heartbreak of seeing big cats in tiny cages, pacing around as if overtaken by madness. Midway through my visit, the veterinarian arrived on site to observe the cats getting their slabs of meat (later, a taxi driver would hypothesize that for every 10 pounds of meat that is earmarked for the zoo, only about two pounds actually make it there). The zoo
definitely showed signs of neglect and disrepair, although there are a couple of pens that

are being rebuilt and/or expanded. Short of undergoing a complete overhaul, however,
there wasn’t much about it that made me think the animals had it good. I befriended a couple of monkeys (kindred spirits) before a needed sunscreen top-up forced me to leave; my sunscreen was back in the mugger-free hotel room.

With all that Guyana has to offer, and knowing that Georgetown doesn’t in any way do it justice, there’s only one obvious solution to my lack of time during this visit: I’ll have to save my pennies and go back.