“Me Wiki O.” I’m doing fine, I reply, having been taught a bit of Saramaccan by Don, my guide for this trip up the Suriname River and into the Amazon jungle. Netta nods and moves off to the open-air kitchen to find some pomelo, knowing it’s one of my favorite fruits. In a bright pink t-shirt and pink patterned kanga, her form is in vibrant contrast to the cloak of green all around me.

The Saramacca people are one of six Maroon tribes in Suriname. They came to the jungle in the 17th and 18th centuries, escaped slaves of African descent who built communities among the verdant palms, vines and trees. 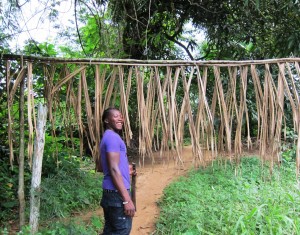 A string of cell tower installations has given them the use of mobile phones, and giant generators provide power to villages from 7 to 11 pm, but there are many things that haven’t changed much in the last few centuries. Like their belief in forest spirits, for example, as evidenced by the palm leaf archways at village entry points, there to keep the bad ghosts out.

As the number of Dutch tourists venturing to Suriname (formerly Dutch Guiana) grows, the Saramaccans are becoming used to seeing the white skin of uninitiated jungle trekkers. At Penpe, the village across the river from the resort, tourist traffic is still intermittent, however. This isn’t surprising, given that it’s a more than seven-hour journey from Paramaribo – three by car, four by motorized dugout canoe, plus ‘layovers.’ The locals haven’t yet adopted the shinier hospitality one might find further down the river at the bigger resorts. They are friendly, but not obsequiously so.

“Today we’re going to start with a jungle walk and a visit to Penpe,” Don says. He’s apologized for his poor English several times since we set off from Paramaribo, but in all actuality, it’s pretty damn good for a third language. He’s also an excellent singer and musician, and I’ve told him I want to buy one of his CDs before we part. “We’ll come back here for 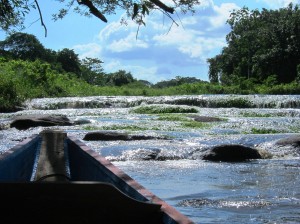 lunch, and after that, we’ll go 30 minutes by boat to the medical center at the village up the river. Then, some relaxing, sitting in the small waterfalls on the river, and finally, a stop at a larger village where you can buy some crafts, if you like. You want earrings, you said, right?” Netta’s not the only one who has been paying attention. He smiles for about the hundredth time in the last 24 hours, and checks in with me. “Does that sound good?”

“Sounds excellent.” My neck and chest bear the bright red spots of a viral rash, I’ve got a sinus infection and my hands are covered in lizard-like bumps, the result of clogged sweat glands. Despite this, I’m eager to get going and see all that I can. At $370 USD for three days, this foray into the Amazon will be the most expensive component of my 16-night trip (I used air reward miles for airfare) and I’m not about to lie under my mosquito net all day and mope.

After a breakfast of Nescafé, fruit, bread and hazelnut spread – a Nutella knock-off made in Holland — I retreat to my cabin to round up the jungle walk essentials: hiking shoes, sunscreen, insect repellent, camera and H2O. My water bottle has been refilled with filtered river water. “It’s safe to 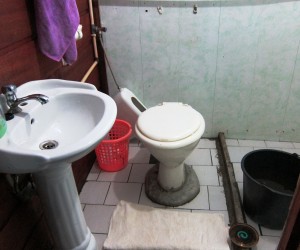 drink,” Don said the night before, and I have no choice but to trust him. I take one last pee and hoist the bucket of water over the toilet bowl to pour and force a flush. Within two hours of my arrival to Pingpe, I’d managed to rip the toilet tank right off the wall, destroy the brackets and flood my cabin. In my defense, the damn thing was plastic and not very sturdy.

Eight magnificent hours later, we’ve completed our jungle hopping and I even have a packet of antibiotic pills from a village clinic. They’re Doxycycline, the type my doctor used to prescribe back in the 90s, and I doubt their efficacy for my infection, but I’m willing to give them a try.

Don angle parks the dugout back at camp, stopping on the rocks near a wooden staircase that takes visitors to the top of the escarpment. “You’re tired?” he asks.

“Exhausted.” Being sick in a tropical country is no fun. “But it’s been a very good day.” I check my legs for any worm stragglers, the little green ones that attached themselves to me in the waterfalls — also safe, according to Don.

“Okay, good. Very good.” He waits while I slowly move forward to climb out of the boat, bashing my knees on the wooden backrests as I go, then skips along to shore on his well-developed sea legs. “I’m going to have a shower now,” he announces. For him, that’s in the river, so he can wash his clothes at the same time.

“Me too.” Back in my cabin, I strip down and sniff the armpits of my merino wool t-shirt. Amazing. I’ve been drenching it with sweat for three days and it’s still fresh as a daisy. Removing the metal mosquito coil holder from the edge of the shower, I step in and gingerly turn the faucet lever, careful not to give it the same semi-Herculean treatment as the handle on the toilet tank; plumbing parts are hard to come by in the Amazon. At least Chapeau, the owner of Pingpe, will bring a new toilet tank to hand off to Don tomorrow at the car-canoe transfer point.

As with the night before, I’m joined later in the dining area by bats, frogs and Sowela and Caldria, the six- and seven-year-old children of Amony, the other woman who works at Pingpe. The kids haven’t an ounce of shyness, playing with my hair within minutes of meeting me on the first day. Caldria is dancing to Don’s CD, and as cliché as it is, I’m wondering how the heck this little black girl has more rhythm in her little toe than I have in my entire body. Netta brings dinner for Don and me: beef, pumpkin squash, and macaroni. It’s surprisingly tasty for something that came out of a camp kitchen. At dessert time, Don gives me his portion of pomelo. “I don’t like it anyway,” he says. 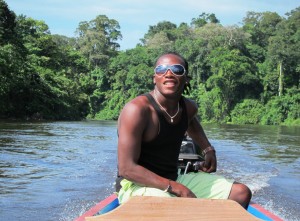 I sleep like a fallen Amazon tree log at Pingpe, and the next morning rise refreshed at 6:30 to pack up and have breakfast. The canoe trip back to Atjoni, where I’ll transfer to a car, is slightly faster as we’re traveling with the river current now. Don hasn’t brought a watermelon on board like he did the first time, but I’m content, regardless. The scenery is sublime, and we haven’t had a drop of rain in either direction, likely because I packed the umbrella given to me by a Dutch couple back in Paramaribo.

Chapeau is in Atjoni to give supplies and a batch of Dutch technical school students to Don, and to drive me back to Paramaribo. I’d complained about Mike, the driver of the shared taxi who carried Don and me on our outbound trip. After two tallboy beers, he’d spent more time in the wrong lane than the right one, and doing more than 100 kilometers an hour in an 80 zone. Now Chapeau is driving 60, and though sober, still can’t stay in the correct lane. When he sees me squirming in my seat, he asks, “Do you drive?” When I affirm yes, he adds, in a sincere voice, “Do you want to drive?”

I decline, citing my lack of an international driver’s license and the fact that Suriname subscribes to the British left-side driving protocol. Within 10 minutes, I’m kicking myself for not taking the wheel from him. It takes every 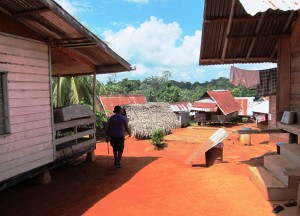 ounce of restraint to keep from saying, “Driving tip: look at where you want the car to go,” but I hold back. Chapeau is a genuinely nice man, and I don’t want to end our outing on a tense note. He’d also made special arrangements so I could go to Pingpe, and his village Penpe, alone.

Back in my Paramaribo guesthouse, I’m rearranging the contents of my backpack. I pull out my hiking shoes, thinking it might be prudent to run the soles under the tap to clean them up a bit. The red jungle dirt that’s caked on to them has filled every nook and cranny, just like the vegetation in the forest. I pause for a moment, then put them back in my bag.