How many times have you purchased a workbook and then put it on your shelf, never to be opened again? (Trois pour moi.) Now compare that to the progress you made when the workbook was tied to a class and there was an element of accountability—probably got more done, huh? 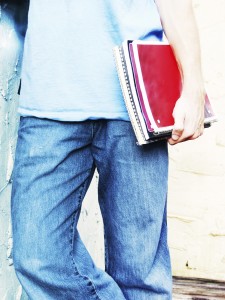 A variant of this concept was recently tested by the National Health Service (NHS) in the United Kingdom. BBC News reported that in an effort to cope with high demand for therapy, more than 200 patients who had already been diagnosed with depression were assigned self-help cognitive behavioral therapy (CBT) workbooks. They were also given up to four guided sessions of approximately 40 minutes each with an adviser.

Results were measured at four months and again at 12 months using the BDI-II test, a common questionnaire for assessing the severity of depression. According to the study published in PLOS One, at the four-month mark, BDI-II scores were lower in the workbook group by 5.3 points (where scores above 29 indicate severe depression). At four and 12 months there were also significantly higher proportions of participants achieving a 50% reduction in BDI-II score in that group as compared to the control group, who received ‘treatment as usual’ from a general practitioner.

There is wide discussion about mental health care in the United States right now and along with individual rights and involuntary treatment, the cost of services is at the center of the debate. The UK’s NHS began its look at a guided self-help strategy for precisely that reason, and the same considerations could be applied to the mental health care strategy discussion in any country:

These are just a few things that I came up with, but if any other considerations or potential benefits jump out at you, please share them below.

I wrote this post with Internet activist Aaron Swartz in mind. PLOS One, who published the study referenced above, happens to be a leader in the open access (OA) movement, which seeks to make the results of all scholarly research accessible to everyone. In addition to his support of this movement, Swartz was also known to suffer from depression.