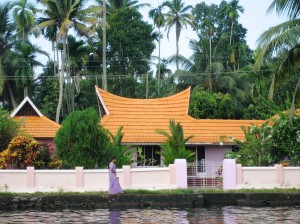 Boasting the highest literacy rate in India (94%) and the highest life expectancy (74 years), Kerala is one of the two Indian states that regularly elects a Communist government (the other being West Bengal). I was drawn to it by my political curiosities, but there are many other reasons to go. Full of natural beauty, Kerala has grown into a destination for ayurvedic tourism, among other things. I did have an ayurvedic massage, and I’ll admit, it kind of sent my body into a tizzy—it was a pretty intense experience!

We spent Christmas of 2009 near the town of Alleppey, and given Kerala’s healthy-sized Christian population, our hotel put on a celebration for its guests. It also stuffed one of its skinny employees into a Santa suit (not entirely pleasant for him, I’m sure, since it hovers at around 84 degrees Fahrenheit at night).

With 400,000 hectares of inland water resources, one of the cool things you can do in Kerala is rent a houseboat and cruise the canals. 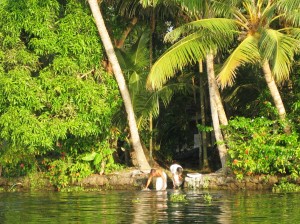 They come equipped with crew, too, so all you have to do is sit back and wave at people as you drift on by. We booked through Beautiful Alleppey, and while you can depart from several different towns, Alleppey—also called Allapuzha—was also our point of embarkation. 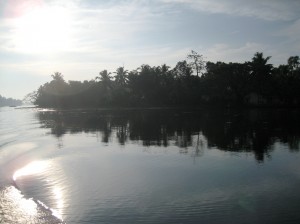 While the on-board bed was hard as a rock, the meals were splendid, and of course, the people-watching completely made the day. There were lots of other houseboats on the water, but there are so many different canals that it’s easy to find quiet, open space.

Wherever you are this Christmas, I wish a merry holiday to you and yours!