I’ve noticed a couple of things since moving to the United States eight years ago: there’s a strange absence of mail collection boxes on street corners and other handy places (I no like having to drive to a post office in order to mail a letter) and a surprising lack of use of the one dollar coin. I was here for years before I even knew there was a one dollar coin. (And if you guys tell me there is a two dollar coin, I am going to be flabbergasted.)

Okay, I’ve noticed a few other things, too, especially now that I’ve been here through two—almost three—presidential elections and a nasty, ugly recession. One thing is that the American Dream really is a real thing! (I’m sorry, America, but in Canada, The Pursuit of Happiness is just a band with song titles like “Gretzky Rocks.”)

As per Wikipedia, the American Dream is about upward social mobility achieved through hard work. The problem is that there’s often a noble but misplaced notion attached to the idea that everyone should be able to bootstrap their way to prosperity. In other words, get there on their own, without external help.

Really, mere mortals, when do we ever get anywhere on our own?

I talk about this a bit in an older blog post on paying it forward, but I wanted to bring it up again because when people say bootstrapping is the way that people should get ahead, à la the American Dream, they usually also talk about small government in there somewhere. (I kind of get that, but I prefer to talk about efficient government. I, too, saw folly in Egypt’s old policy of giving every university graduate a government job.)

So, whoa. Let’s not go small and get rid of one of the primary sources of assistance for people who are trying to get ahead just yet (although I do point out some glaringly silly system barriers that are a result of government programs in last week’s post.) Because if we did get rid of a whole bunch of government programs, then we’re supporting the notion of people being able to get ahead all by their lonesome selves. 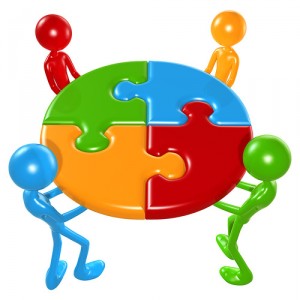 Now, before you point out that you have never needed any government assistance or non-profit services or therapy or whatever, let me just ask you to think about who or what replaced those things in your life? Who, or what, helped you to get ahead? I know there was someone/something. And whatever those people or things were, not everyone has access to them (or a reasonable facsimile.) Doesn’t mean they shouldn’t have a shot at the American Dream, if they so desire.

Bootstrapping is a nice idea, but it contradicts an important fact. We are human beings. We don’t do anything alone, and there’s no shame in asking for or receiving help, no matter what the context. In fact, I’d say it even contributes to building a stronger fabric of our society.