Like Georgia, Nelson Mandela has been on my mind lately. Alright, truthfully, I think about him a lot all the time, as I’ve had a minor crush on him as far back as I can remember. My husband finds it quite amusing that he must compete with a 93-year old for my affections. In these times of political polarity in the United States, though, Nelson (I agree, it’s creepy that I think that we’re on a first-name basis) emerges in my daydreams most often for some of the things that he did as a nation builder in post-apartheid South Africa.
Let me start by saying that I have been to South Africa three times now, but have written very little about it. By far, the most important of my visits was from 1993 to 1994. Living in Johannesburg, I worked as an intern for a local non-profit called the Grasmere Community Development Trust. I was there from December through July. South Africa’s first fully-representative democratic election was in April, and Nelson was inaugurated as president in May (an inauguration which I attended). I was also an accredited election observer for South Africa’s electoral commission.
In the weeks leading up to the election, the country was in a very volatile state. Bombs were going off all over the place, including one at a polling station that was on the list of stations that my four-person observer team was to visit.  I told my dad that it was fortuitous that it had been blown up before the election, as it was highly unlikely that it would get hit twice, right?
The other potential spoiler was the Inkatha Freedom Party’s (IFP) refusal to recognize the election. Its leader, Mangosuthu Buthelezi, joined at the very last minute, and I spent the early hours of the first polling day affixing IFP stickers to the bottom of the ballots.

The elections themselves were monumental: peaceful, joyful and historic. The entire country, and many others around the world, let out a gigantic, collective sigh of relief. And then the task of rebuilding a nation began. 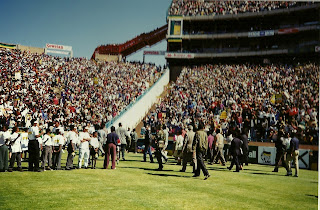 Nelson Mandela walks the arena to greet supporters at an ANC rally.
Several years of multi-party negotiations had laid the groundwork for the 1994 elections, and one of the outcomes, an interim Constitution that was ratified in 1993, made it so that the election winner would need a two-thirds majority in order to rule as a single-party government. With 62.65 percent of the vote, Nelson had to form what was called a Government of National Unity. In other words, he had to invite his frenemies. F.W. de Klerk, of the previously-ruling, apartheid-era National Party (and with whom Nelson shared a Nobel Peace Prize), and the IFP’s Buthelezi became Nelson’s deputies.
The magic of this arrangement is that it worked. The government wasn’t rendered ineffectual. Buthelezi and de Klerk didn’t set about to bring Nelson’s administration down. They worked together, under Mandela’s leadership, to do what the country, and its people, needed at that time. Nelson co-opted his adversaries in the name of the greater good (which was to build a democratic state), and he did it successfully.
Then there was the Truth and Reconciliation Commission (TRC). Often discussed in contrast to the approach of the post-WW II Nuremberg Trials, the TRC was tasked with investigating human rights abuses, restoring victims’ dignity and reviewing applications for amnesty received from those who had committed abuses during the apartheid era.
Viewed by some as a politically-expedient move, and/or a failure of justice, I see the TRC as a brave and bold strategy that focused on reconciliation and healing rather than retribution as a step towards the new South Africa. Opinions on its success vary, but one thing is clear: the spirit that it cast over the nation during its two years of hearings left a very different imprint on the country than if the lion’s share of the focus had been on war crimes tribunals.  I am not saying that criminal prosecution did not have a place. It wasn’t given center stage, though. The evil of decades past was not allowed to set the tone for the first chapters of post-apartheid South Africa. 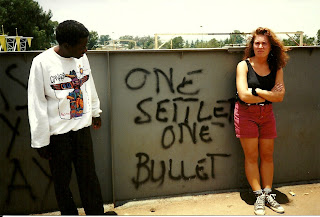 The way things might have gone if reconciliation hadn’t been the focus.
Obviously, politics are a complicated lot, and politics in South Africa are especially so. No, Nelson wasn’t single-handedly responsible for the collaboration and reconciliation that figured so largely in his administration. He knows this, though, and has seemingly maintained his humility with regards to his role and the confluence of people and variables that changed his country. When being prepped in Oprah Winfrey’s green room in the late 1990s, he asked her, “What is the topic of today’s show?” Her response was, “Why, it’s you.” (Another reason I love him).
I will state here that I am fully aware that Nelson was the leader of the armed wing (Umkhonto we Sizwe) of his political party, the African National Congress, and had a hand in some nasty acts during apartheid. The difference to me, though, is the type of fight that he was fighting: his battle was to free an oppressed majority. The ‘other side’ did equally bad or worse things, in order to oppress said majority. It’s not apples to apples, at all. Nelson also spent 27 years in prison, and while some convictions and sentences may have been legitimate, some were clearly not. He paid a debt to society, and emerged a stronger leader than before, focused on where the country needed to go, not where he had just been.
With each year that Nelson adds, and with each political campaign that is run in the United States, the pit of despair in my stomach grows a little bit larger. I fear that Nelson Mandela, the man and his leadership, were an once-in-a-lifetime occurrence.  No peace, no peace I find. Just this old, sweet song keeps Nelson on my mind.