I like islands. They usually have fewer cars and more beaches than a mainland. I made the decision early on in my trip to cap it off on a Bay Island in Honduras, but I just had to choose which one.
Of Utila and Roatan, Utila was the early frontrunner. It had the following pros going for it: cheaper, smaller, and less built-up. I was all set to go there until about 12:30 in the afternoon when a couple of different people gave me their comparison of Utila and Roatan, and noted that ‘given my age,’ I might prefer Roatan. Utila’s street (singular) is pretty much lined with drunken twenty-somethings, and god knows that after my last night at the Jungle River Lodge, I don’t fit in with that scene. Unfortunately, I didn’t really fit in with Roatan’s scene either, but there were other pluses that made it a better choice for me.
Roatan has good right-off-the-beach snorkeling (and good beaches), whereas Utila lacks in both of those areas. Apparently Utila is also lousy with sand flies – the woman that told me this pointed to all the scars on her legs as evidence. Seeing as I’m still carrying sand-fly scars from last year’s trip to Fiji, that factoid mattered to me! Finally, I heard that Utila was more humid, really dirty, and that the accommodations didn’t deliver. Two of the women I talked to had stayed in the same Lonely Planet “mid-range” hotel that I’d been contemplating, called Rubi’s Inn, and they complained of water shortages and toilets that didn’t flush.
So, off to Roatan I went. I knew that restaurants were the source of a significant cost differential from Utila or the mainland, and so I planned on trying a place called the Mariposa Lodge as it has fully-stocked kitchenettes. Lucky me, the owner was already at the ferry terminal picking up other guests, and he had one room left.
Four out of five of us in the minivan were Canadian, including the owner, Mike. It took me until the next day to realize that the name of the lodge, Mariposa, was distinctly Canadian, too. I learned that it’s the name of a fictional Ontario town (thought to be Orillia) in a Stephen Leacock novel; I had only known it to be the name of the figure skating club from which Brian Orser and Elvis Stojko came.

The lodge was higher in price than my backpacking budget boundaries, but I reaaaaaally wanted someplace comfortable for my last handful of nights. For $40 USD, I started in their one small air-conditioned room, but then moved into an apartment unit (they have five) as soon as it became available. It was perfect: about 100 meters from the main street and beach, hot water showers, three cats, a dog, hammocks, breezy porches, and lots of lizards. I stocked my fridge with beer, milk, and Jamaica flower-flavored Tang (does Jamaica have Honduras-flavored Tang?) and I was content. Here’s to flopping out for a week! 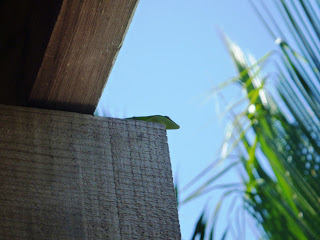 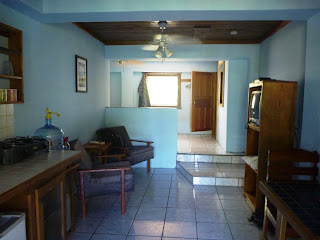 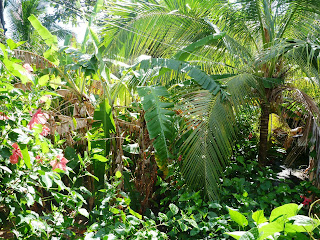 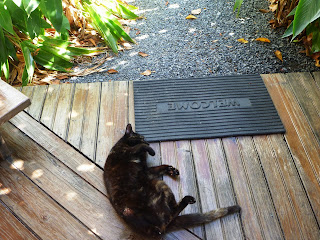