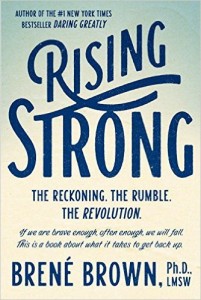 My, how time flies. It has already been more than three years since I wrote about how much I was diggin’ Brené Brown and her vulnerability study. Not that what she said in that TEDx Houston talk ever left me in these intervening years. No, no, no. Her message about reaching wholeheartedness through vulnerability—reinforced at times by the wisdom in her books–has been like a beacon, a light that shines brightly at times, and at other times all but disappears in the fog. But when the fog clears, it’s still there, and I’m still going toward it.

So, one thousand two hundred days later, when tickets for her Town Hall Seattle appearance went on sale, I was on that web site right when the clock struck 10 a.m. (Good thing, because it sold out in less than 20 minutes.) She came through as part of the tour for her new book Rising Strong, and, given her inimitable way of explaining important-to-your-life concepts like you are buds sharing stories over a cup of coffee, I think everyone was totally bummed when the time came to wish her farewell.

There have been a number of heartfelt and humorous book reviews written for Rising Strong, like this one by Jill Dahl and this one by Dr. Courtney Stivers. I’m going to talk about the live version of her message that if we are brave enough, often enough, we will fall. What Brené has explored in this round of research is what it takes for a brave soul to get back up and keep going.

Her answers to this line of inquiry aren’t comfortable. (They haven’t been in the past, either.) She asks us to look squarely at our emotions and undertake our own line of inquiry. Awareness is great, but how much deeper can we go? How willing are we to noodle around inside that emotion like a calm and objective aunt, instead of a panicked squirrel? Brené has found that our willingness to go through this process is directly correlated to our resilience. Likewise, our courage to own our stories – the stories we make up for and about ourselves that are usually tied to a bigger, uglier emotion – is correlated to our ability to rewrite the story ending. After the pain comes the power. 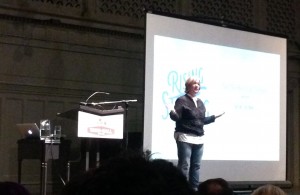 When she appears on stage in her jeans and black jacket with the white shirttails sticking out (like a coffee date outfit), and kicks things off with a few swear words (like a coffee date that bleeds into a wine date), and then yanks open her heart and shares her honest and authentic and vulnerable self, it’s pretty dang hard to walk away untouched. And in this lies one of Brené’s many gifts as a speaker: She grabs you in a big Texas hug, and she holds on to you through the uncomfortable part until you can relax into it. Until you are okay with it. Until you understand on a cellular level that the hard stuff she’s asking you to surrender to doing is really what you have been seeking all along. And you trust her, because she is so earnest.

She is also funny like Tina Fey, which, for her audience, has the effect of softening the angst around what you will encounter should you choose to go noodling. She laughs at herself so we can laugh at ourselves. She turns decades of interviews and research into relatable stories so we can get it, “it” being that if we don’t face all of the things which hurt us the most, we are always going to hurt. Taking the easy road out is only easy for so long, and then it turns into a highway to hell. But Brené has faith in us. She knows we can do it. And we can feel that, so we’re willing to give it a try, this reckoning and rumbling with our emotions and the stories in our heads. For her. For ourselves. For humanity.

One of Brené Brown’s early goals was to use her writing to ignite a national conversation on shame. With what she brings to the stage, she is stoking the fire of something more: a global action toward healing. And that may be her biggest gift of all.

Brené, thank you for holding on to us and not letting go.

Fun and funky, Dr. Brené Brown is a research professor who studies vulnerability, courage, worthiness, and shame and how they relate to a person’s sense of what she calls ‘wholeheartedness.’ I first got turned on to her when Molly Greene posted a link to Brown’s TEDx Houston talk in one of her blog posts.

The clip is 20 minutes long, which often is about 17 minutes longer than my attention span; however I’ve now watched this particular video four times and have emailed it to several friends. I like what this woman is saying enough that if there were still tickets to her upcoming talk in Portland in July, I’d drive the 175 miles to be in the same room as her for an hour. END_OF_DOCUMENT_TOKEN_TO_BE_REPLACED