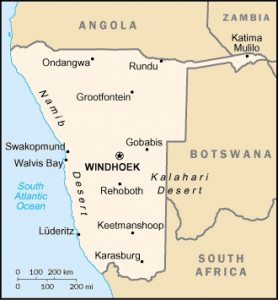 If you’re standing on a sand dune in Swakopmund, Namibia and you’re in a George Mallory state of mind, what do you do? Yes! You put on a helmet, wax up a quarter-inch-thick piece of particle board, lay on it, and rocket down the slope at 80 kilometers per hour!

Chris Jason and Beth Sarro were definitely channeling George when they founded Alter Action Sandboarding in 1996. In a country with a population density of 2.5 people per square kilometer, they found what they call “the perfect dune:” approximately five kilometers outside of Swakopmund, 100 meters high, and with six faces down which you can plummet.

In the beginning, the only method was face first and on your belly, but Jason and Sarro later introduced stand-up boarding, too—a tweaked version of snowboarding. A handful of other outfits are offering sandboarding in Namibia now, but when I went in 1997, it was Alter Action who took me out for a bit of high-speed insanity.

The trick to this extreme sport is simple: keep your feet up if you want to go fast, and keep the front of your board up if you want to stay on it. On my third or fourth run, in the midst of all my wheeeeeeee-ing, I let the front of my board drop. It hit the sand and stopped; I however, did not. A few sideways somersaults later, I got up and dusted myself off. Luckily, my worst injury was a couple of tablespoons of sand in my eyes, much of which remained stuck to my contact lenses (besides the helmet, we also had elbow pads and gloves). Once my eyes were clear, I climbed the hill again for the remaining runs, and dodged further disaster.

So what does 50 miles an hour feel like when you’re flat on the ground? Well, I’ll tell you. It feels like &*%^#%^%#%^ and %#%^^&*#@@(&%. You get going so fast that every last bit of adrenalin your endocrine system can possibly muster is flying through your body at the same speed or faster. You feel the bumps, and you get air time. You think, “Holy Mother of God, why am I doing this?” And then as soon as you get to the bottom, you want to do it again.

Have you ever tried any extreme sports? (Curling doesn’t count.) And would you try this?