Okay, how is it that I washed my hair this afternoon and yet still have sand in it?!
Anyway, back to Feb.6th and waking up in Tela with no set plan of where to go. Part of my indecision was based on the fact that I’d sent a query email to the Jungle River Lodge the morning before, but no one had replied. I wanted to see if I could fit in a jungle zip line tour with them and then still manage to get the desired six nights on a Bay Island at the end of my trip. My options were to bus it to La Ceiba, then just head straight to the ferry terminal and go to an island, or to take a taxi to Jungle River’s guesthouse in La Ceiba (called Banana Republic) and try to sort out the zip line from there. I’d developed a sudden urge to go sailing through the tree tops at high speed and it would be my last chance before I went home, so I decided to try the latter option.
Ask me how annoyed I was when I arrived at the guesthouse in La Ceiba at 1 p.m. and had Spicer, the staffer on duty, tell me that the jeep transport to the jungle lodge (and subsequent zip line tour) had just pulled away as I was getting out of the cab? Pretty dang annoyed, especially since I had emailed more than 24 hours prior with those very questions. I was also interested in going the next morning, but the free night’s stay that is thrown in with the tour only applied to the jungle lodge, not the guesthouse, so I’d lose that bonus. Plus, I’d be staying a night in a city as opposed to in the jungle, which was half of the whole point of doing the tour.
Spicer’s idea was to stand on the street and try to flag down a cab that could then race along and catch up with the jeep. After about two minutes of that, I said, “You know, that’s just not gonna happen.” He said that he could arrange a taxi hire to take me there for 250 lempiras ($13 USD), so I said, “Super, let’s do it.” He also radioed to the lodge and so that they’d wait to start the tour until I got there. The taxi came within five minutes. I was still pissed off, but I was on my way.
The Jungle River Lodge is only about 30 minutes outside of La Ceiba, but it felt like it was a world away. Built along the banks of the Rio Cangrejal, it backs up against the hills of the Pico Bonito National Park. It is a fantastically beautiful setting. From the restaurant, you look down on a natural rock swimming pool (its sides augmented by cement in just a couple of places), and beyond that, the rushing river. 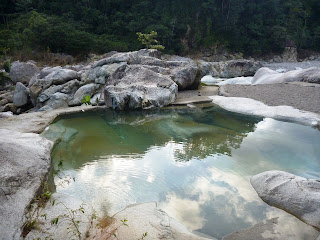 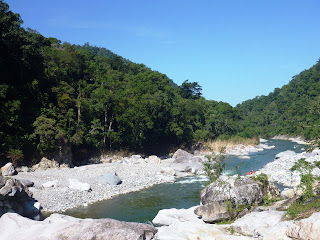 Our group of five got kitted out with harnesses (very binding, I might add), helmets and a glove, and off we went. The first stop was Canopy Tour School, a short zip line so that the guide could demonstrate the technique – legs out in front, one hand on the harness, gloved hand lightly resting overhead on the zip line for braking – and we could all do a test run. Our guide Denis and his assistant were very diligent in their instruction, and then, off we went to start on the first of the eight lines.
I loved it from the first launch. Up high in the air, flying across the river, I squealed like a little piggy. Denis told us that you can get going up to 50 miles per hour on the fastest lines. Perfect, I thought. 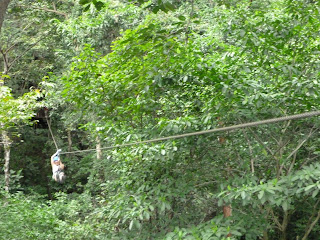 We did half of the runs, and then stopped for a tour through the jungle. Denis found a termite hive and gave it a tap. Out crawled hundreds of termites, up and onto his hand, as well. “They are full of carotene, and taste like carrots!” he said. Offering them around for a taste, I declined. “Squish it first so that it’s dead when you put it in your mouth,” one woman advised. Nyet thanks. I almost tried them, but just wasn’t in an experimental mood. 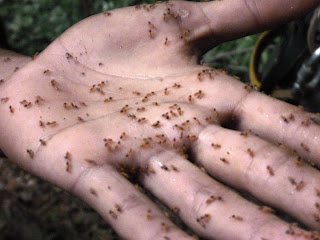