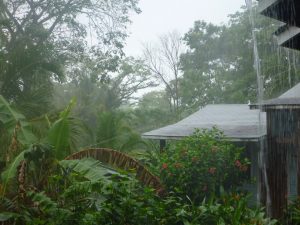 The thing about the generally resplendent weather in the tropics is that when a storm does roll in, it’s usually a pretty good one. For my first five days on Roatan, there would be an hour or two of rain in the early morning or late afternoon, but the rest of the day would be lovely. On my last day, however (which was Feb.13), the elements really kicked up a fuss.

It poured rain all morning, the kind where if you stand in it for even five seconds you’re pretty drenched. I had planned on going for a stroll to take photos of the West End village as I hadn’t really done that yet, but ended up stuck on the porch at the lodge (having checked out at 10:30 am) until I left to catch the ferry back to La Ceiba.

My travel plan, down to the spending of my last lempiras, had been carefully mapped out. I was going to catch the 2 pm ferry from Roatan to La Ceiba, then get a bus that was heading for San Pedro Sula and just get off in El Progreso as the airport is exactly half way in between the two. I decided that I’d spend my last night there instead of SPS because a) I could get off the bus an hour earlier, b) hotels cost less, and c) it’s a smaller town. “Ha!” said Mother Nature.

If there’s one thing that I have shit luck with, it’s getting favorable weather conditions when I’m trying to depart from someplace. Mike, the lodge owner, drove me to the ferry pier, and quickly noticed that most everybody was getting into a taxi, not out of one. The afternoon ferry was cancelled (and the next morning’s ferry/bus combo would not get me to the SPS airport in time for my flight home).

Off to the Roatan airport we went, getting well soaked in the five-second dash from the van to the terminal. I was surprised to find out that planes were still flying when the ferry wasn’t sailing, but Mike explained that the Rio Cangrejal dumps out into the sea right near the La Ceiba ferry terminal, and when things really get rocking boulders the size of Volkswagens have come flying down the river. At any rate, I forfeited my $28 ferry ticket and bought a $90 seat on the 5 p.m. flight straight into San Pedro Sula. “Ha!” Mother Nature said again, even louder. She can be so haughty sometimes, that one.

The plane was a 19-seater Central American Airways Let L-410, made by a Czech company and in the prettiest shade of turquoise. I snapped some photos of the captain and his co-pilot as they squeezed themselves down the aisle and chatted with the passengers. Luckily, there was a break in the rain at the low levels, but it was still pretty poor visibility and I had a few stomach-in-my-throat moments. We landed after 40 minutes, and the Honduran woman across from me, in perfectly unaccented English, said “That was freaky.”

After a non-descript night in a non-descript hotel room, I was back at the SPS airport by 9:30 in the morning. While lining up to go through the first checkpoint, I observed several clusters of people, tightly huddled together as if getting ready for a football kick-off. Around them was a TV crew, extending microphones over their heads. I asked the woman in front of me if she knew what was going on, and she replied that a Central American Airways flight from SPS to Tegucigalpa had crashed that morning, and there were no survivors. The reason was poor visibility, combined with Tegucigalpa’s notoriously difficult runway approach.

Quickly overtaking my thoughts of sadness for the passengers and their families was the cognition that I’d been on the same model of plane, flown by the same airline, in the same crappy weather just 16 hours earlier.

In my 25 years of travel, there have been very few risk factors that have given me pause for thought with regards to my own mortality. I have weathered some pretty extreme situations over the decades and either ignorantly or courageously (depending on how you look at it) soldiered on. This is the second time, however, that a plane crash has forced me to consider some of the less desirable aviation situations that I have been party to, and to give thanks and love to my guardian angels (a group that has only grown in strength with the 2009 addition of my dad). They carry me safely from place to place, and this month, they got me all the way home to Francis, Yolanda Pug, and Sushi Cat on Valentine’s Day. I am immensely grateful that they have stuck with me for all these years. I’m not always an easy travel companion.