Even though I’m writing a memoir about having a mother with a mental illness, and the personal journey that came from that, I don’t blog much about the shifts in thinking and feeling that are still going on in my body and soul. Then, in early October, I attended the Women in Biz Network’s (WIBN) Go For It conference in Vancouver, B.C. and I’m strangely compelled to share what it’s done for me. 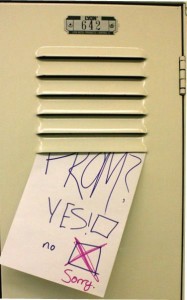 Let me start by saying that I’m writing this post for anyone who has ever put the brakes on saying or doing what they wanted because they were afraid they wouldn’t be liked. That their content would be criticized, or someone would laugh at them, or they wouldn’t get invited to the event they wanted to attend, or they’d be ignored completely, or… or… or… .

Are you still with me? I thought so.

Let me also say that I’ll talk more about the actual conference at the end of this post, because I do believe that the organizer and presenters deserve props for the fantastic event they created. But first…

Getting Picked Last for the Team

Something I realized after the WIBN conference is that I’ve craftily avoided acknowledging the fact that I have the same fear of rejection I did when I was nine. Because I’m almost 45, and if I haven’t got my shit together by now and overcome that silly fear, then what does that say about me? How far have I really come in my personal and professional development? Who am I?

Er, …. a flawed human being, just like 95% of the population. And I’m not suggesting that the other 5% are perfect; no, they’re deeply flawed.

So here’s the truth that coated me like butter at the conference (sticky butter that has STUCK to me): it’s not about me.

Ask Yourself What’s Holding You Back

If fear of rejection is what’s stopping us from doing what we need or want to do (you can translate “need or want” into whatever fits for you, and you’ll know what it is), then we’re focusing on something over which we have no control—never have, never will–instead of on the things we can actually do. 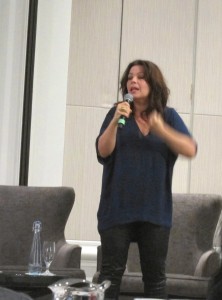 Danielle LaPorte spoke at the conference, and her bit of butter was to say don’t be attached to the criticism or the praise you receive. Disconnect from them and you’ll be free to follow your passion without distraction. Can you see the wide-open field full of daisies, and you’re running through it with your arms stretched out to the sides? Freedom feels good.

Will the Fear of Rejection Still Be There?

This one, I’m not totally sure about. Probably. But I can detach from it, and I believe you can, too. Watch it float by in a bubble. Oh, hello. Oh, goodbye. And then get on with what we’re here to do.

Leigh Mitchell founded the Women in Biz Network and put together the Vancouver conference with her sister, Jen Boucher. It was a high-stakes undertaking – Fairmont hotel, big-draw speakers, top-tier corporate sponsorship, international attendance – and I saw at least two occasions during the event where Leigh publicly acknowledged the fear in front of her, then pushed it out of the way and kept on trucking. Ultimately, it was one of the things that impressed me most about the weekend, and Leigh.

The presenters had a great combination of wit and wisdom, and they spoke on topics that included product launch, leading a radiant life and business, and building a personal brand, to name a few. There was also yoga and meditation, because you’re useful to no one if you’re disconnected from your center and your spirit is fried tofu. 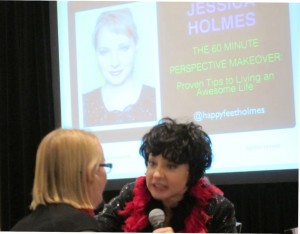 Here’s the complete list of presenters, with my thanks for what they brought to the event:

For me, one of the nicest things about the WIBN conference has been that I didn’t work at shifting my feelings or beliefs, and yet, it’s happening. I went with an open heart and mind, came home, and felt different. Braver. More objective. Clear. Like if the next new thing I try fails, I’m not going to crap my pants. I don’t go to a lot of conferences, but I’d say this one was a pretty good investment.

Have you ever had an experience at a conference or event that changed your feelings or core beliefs?