In screenwriting, the three-act structure can be broken down as exposition, rising action and resolution. In my relationship with my mother, the third act of “resolution” began in 2009, and followed the lengthy and excruciating first and second acts of “raised by crazy mom” and “estranged from crazy mom.”

The thing about our third act is that for many years, I had no idea if it would ever come. My mother could have passed away before I saw her again (and that dreadful scenario was ever-present in my imagination). We needed a transition between the second and third acts, which, mercifully, was facilitated by a social worker. Once the third act started, I didn’t know how long it would last, and still don’t, but now count every year as a bonus. And given the volatility of our first act, the nature of this final one is, well, quite bizarre.

When my mother was crazy with undiagnosed psychosis, it was difficult to be anywhere near her. She was often in a rage, and when she wasn’t, my sister and I would be waiting on tenterhooks for the next rage to start. My sister left home at age 17 and I was out by 15 (and lived with my sister, a benefit of being the younger sibling). As I turned into a late-years teenager and then young adult, my mother behaved toward me the same way she had always interacted with the “outside world,” her rage replaced by a carefully controlled mask. It was fragile and fake, and, in the moments when cracks appeared and her behavior faltered, completely unnerving.

After all of that, Act Three opened with my mother’s diagnosis of dementia. It was already quite advanced when an aunt took Mum to the hospital. She stayed there for three months before going to a nursing home, and that is where my sister and I met her again for the first time in 17 years.

Most people don’t count dementia as a blessing, but my sister and I do. My mother is no longer paranoid, suspicious of everything that moves. She has no anger left. Her delusions are gone. So is her memory and her verbal recall, but she doesn’t miss them anyway. In a magic twist of fate, she is the happiest, most cheerful and easygoing resident in her nursing home ward. And because of this, I have my mother back in my life. She doesn’t know who I am, but boy, do we ever enjoy each other’s company. 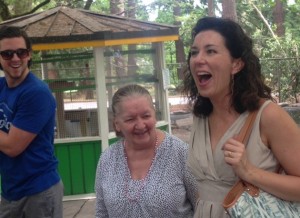 Mum turned 80 last Friday. To celebrate, I joined my sister, her ex-husband and their two sons, and we all took Mum for lunch and a walk in the park. We visited the petting zoo, where Mum was greatly amused by the children and I was greatly amused by the goats. We ate strawberries at a picnic table, and hamburgers and French fries at a restaurant. Mum chattered and sang and laughed. My brother-in-law, who hadn’t been near her for decades, was a bit freaked out. He said, “It’s almost like she’s faking it. You know, the last time I saw her, she tried to kick me in the balls.”

Our third act has been playing without intermission for six years now. Mum is physically healthy, and her dementia has leveled off quite remarkably, with no major changes in her symptoms for the last few years. I visit her whenever I can (she is in B.C., I am in Seattle) and just keep adding scene after scene to the screenplay that is our lives, filling those long-empty pages and feeling blessed that we never seem any closer to having to write an ending.

A study in the May issue of the British Journal of Psychiatry has concluded that late-life depression is associated with an increased risk for dementia and Alzheimer’s disease. After conducting meta-analysis on 23 existing studies that studied nearly 50,000 adults over several years, researchers concluded that adults with depression are more than twice as likely to develop vascular dementia and 65 percent more likely to get Alzheimer’s.

Holy crap. Them are some hefty numbers. END_OF_DOCUMENT_TOKEN_TO_BE_REPLACED