It’s always amazing to me how much brighter my outlook on life is on the day after a transit day. After a long day on the road (and usually arriving at my destination at night), hotel rooms always seem to look a little grungy, people a little shifty, streets somewhat inhospitable. It was like that when I arrived in Tela. When I got up on February 5th, though, with the sunshine coming through my window my hotel room looked pretty decent. Outside, children played. The streets were alive with the bustle and noise of daily commerce. It was a whole new place.

Originally I had thought that I might take a boat tour over to the nearby Parque Nacional Jeannette Kawas or maybe rent a bike and ride to a nearby botanical garden, but when I woke up, I didn’t feel like going anywhere quickly. Instead, I used the day to stroll around Tela, drink a lot of coffee, do some people watching, and take in sunset on the beach.

I’d heard mixed reviews about Tela from other travelers, but I quite enjoyed it. I only saw about six other tourists throughout the day, and the rest of the people hanging out on the boardwalk or having a picnic on the beach were Honduran. Like Dangriga in Belize, Tela felt very authentic to me. The wares for sale along the main street weren’t oriented to tourists; there were Dora the Explorer backpacks, a lot of kitchen items, and a lotta lotta colorful plastic – China has been here, too!

Everywhere I went, I found political graffiti spray painted on building exteriors. I’m going to have to do some searching on the interwebs to see what that’s all about when I have some time. 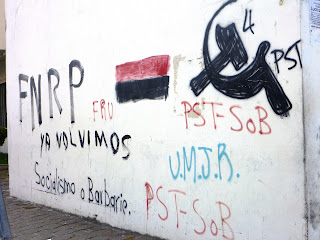 There were several banks around the Parque Central hub. The one in which I changed some money also doubled as a furniture store. There were several sofa and loveseat sets, some major appliances, apparently a BIG sale going on, and then a couple of teller windows off to one side. 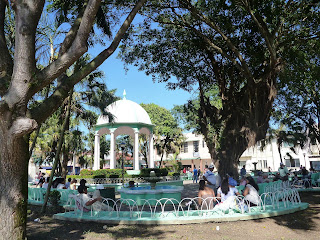 I had an early dinner that night. I’d found the restaurant where I wanted to dine — it had conch on the menu – while walking around in the afternoon and then mistakenly asked them “At what hour it’s open?” instead of “Until what hour it’s open?” When the waitress said six, I thought it very odd, but didn’t question it. I came back for dinner at 5:45 p.m. and then realized my Spanish stupidity as more and more people arrived the later it got. Doh!

The beach didn’t have stunning blue Caribbean water, but I could see it just off in the distance! What a tease. Closer to shore, it was pretty brown. I noted that there were lots of garbage bins tied to palm trees on the beach – always a good sign. More importantly, people seemed to be using them! 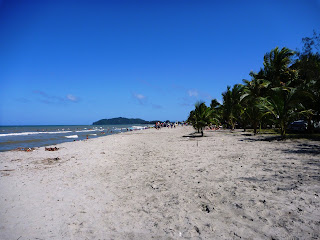 There was a good smattering of restaurants and bars along the boardwalk, although the only one that I found that had Wi-Fi was César Mariscos. Of course, it was also the most expensive restaurant. I self-sacrificed by buying a strawberry daiquiri while I was having a Skype chat with my hubby.

The Sinai hotel had cable TV (still no hot showers, but there was a TV).  At home I average about three hours of TV per week, most of it while on the treadmill at the gym, but with the dark streets of Tela being so uninviting, I zombied out on three consecutive episodes of House. Those writers really need to shake up the formula a bit – it is so predictable! What’s not predictable is my schedule. I haven’t decided where I’m going tomorrow, and I love that about this trip.