You won’t find a lot of Big Ag in Suriname; in fact, you won’t find a lot of big anything there. With a population that barely eclipses the half-million mark—most living along the northern coastal area–the largest venture in South America’s smallest country is bauxite mining. And while there are some export food crops, primarily rice and bananas, start heading deeper into the Amazon Jungle and soon the scale of farming operations shrinks.

Approximately 30 percent of Suriname’s land area is protected by law. This leaves wiggle room for the village communities that line the rivers to clear plots for subsistence farming without doing extensive damage to the flora and, subsequently, fauna.

I took a trip down the Suriname River in March of this year and had the opportunity to visit one such village. Leaving from Atjoni, on the south end of Brokopondo Lake (and also the point where the road ends), the journey to the village of Penpe took four hours in a motorized dugout. I made the trip with a hired guide named Don, as it’s generally both unwise and somewhat impolite to navigate the river without the help of a local.

Once in Penpe, Don pointed out a variety of plants which were unique to the region and/or that I’d never seen before. One of my favorites was the Vigna unguiculata, subspecies sesquipedalis, or, the long bean. The pod grows to about 18 inches in length, and for cooking, tends to be chopped into sections and fried.

Staple crops, such as rice, cassava and peanuts, were plentiful, and for the things that can’t be grown, a village shop carries products that have been transported down the river. Inventory is limited, but then again, so is the size of the consumer base, as is highlighted by the little shopper in the photo. 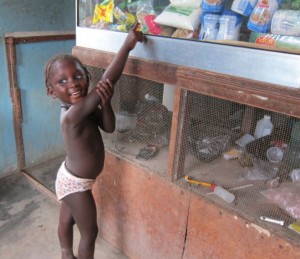 Unsurprisingly, the three Guianas (Guyana, Suriname and French Guyana) have a jungle’s worth of medicinal plants (just check out this list!). Two different kinds were presented for my inspection. First, one that looks similar to the edible long bean, but opens up to show a much different, fleshy interior and a seed that isn’t edible, according to Don. It’s called Inga edulis, or ice cream bean, and its leaves and seeds are actually used medicinally, against arthritis, rheumatism and diarrhea. And then there’s the porcupine-quill-covered pod. It’s called the Kan-kan udu, Apeiba Glabra (fam. Malvaceae). I’d hate to step on one barefoot.

On the fruitier side of life, I was able to see what the bright orange Awara (Astrocaryum Vulgare) looked like before it was squished up into the tasty juice I’d consumed earlier that week in Paramaribo. Small in size, it packs a punch with regard to nutrients and uses. Awara fruit is an excellent source of carotenoids, as one might guess from its color, with a concentration of ß-carotene that is higher than carrots. It’s also an important source of vitamin B2 (riboflavin). Finally, the oil extracted from the pulp contains both saturated and unsaturated fatty acids and is used in skin moisturizers and hair products.

Don couldn’t shed much light on the regularity of pesticide and fertilizer use on a village farm plot like Penpe’s, but a United Nations (UN) story from 2011 alludes to organic farming as being relatively uncommon, and highlights a program that the UN had been funding for at least five years to promote organic farming in Suriname.

The community of Penpe was chosen for our visit because it’s the home village of Chapeau Siesa, owner of the nearby Pingpe lodge at which I stayed, and it has an interesting history. Penpe was created by the Saramacca people, one of six Maroon tribes in Suriname. They came to the jungle in the 17th and 18th centuries as escaped slaves of African descent and started from scratch (the name Maroon comes from the Latin-American Spanish word cimarrón, meaning “feral animal, fugitive, runaway”). While they now have mobile phone usage and generator-powered electricity for four hours a day in Penpe, my guess is that some of the food crops in their jungle garden were growing long before their arrival.

I’d like to give special thanks to Don Majokko for his guiding skills, and to Linda and Rein at Tropilab for helping me get the correct names for some of my funky flora finds.

Note: This article was originally published on GoodFoodWorld.com.

This table compares a number of variables that you might want to consider if you’re planning to do an excursion into the Amazon jungle in Suriname or Guyana. My research was not super extensive, however I think I can safely cover the basics of what to expect (and for my own trip in March 2013, I went into the jungle in Suriname). END_OF_DOCUMENT_TOKEN_TO_BE_REPLACED 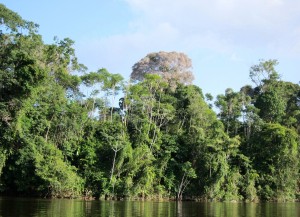 “Me Wiki O.” I’m doing fine, I reply, having been taught a bit of Saramaccan by Don, my guide for this trip up the Suriname River and into the Amazon jungle. Netta nods and moves off to the open-air kitchen to find some pomelo, knowing it’s one of my favorite fruits. In a bright pink t-shirt and pink patterned kanga, her form is in vibrant contrast to the cloak of green all around me. END_OF_DOCUMENT_TOKEN_TO_BE_REPLACED