I originally posted this story a year ago, then took it right down to revise it and enter it in a contest. I didn’t win the contest. The box of plastic wrap is still with me, however, and just turned 16 years old.

That’s right. It has been with me for 15 years. It even crossed an international border.

My acquisition of this particular kitchen aid occurred during a previous relationship. It was 1996, and I had been going out with Hank for about three years. After doing the painful long-distance thing, we finally took the plunge and rented a luxurious <cough> basement suite in a suburb near Vancouver. It was all going very well, and I had even adjusted to the smell of damp, sweaty hockey gear in my living room. And then, one fateful day, we went grocery shopping together.

I was trolling the aisles with a budget in mind, and wanted to get out of the store without dropping more than a hundred bucks. Hank liked meat, so there went half of my working capital. As punishment for eating more than me but insisting we split the grocery bill evenly, I wouldn’t let him buy coffee (I was such a bitch). Our paramount disagreement, though, came when we got to the food storage section.

Hank’s view was that we should buy in bulk, thereby reducing the cost-per-unit price. Like most of my relationships up until that point, I had a shorter-term outlook, and was happier to keep the money in my wallet right then and there. It seemed outrageous to invest eight dollars in a box of plastic wrap. More importantly, I was the daughter of the man who introduced Tupperware to Canada. No joke. My, er, excuse me, our cupboards were full of environmentally friendly and technologically advanced food storage options.

The box that Hank settled on contained 2500 feet of wrap. “We buy that size and we will have that bloody thing forever,” I said.

To collect a proper metric on eternity, Hank got a black felt pen and wrote the date in the left-hand corner of the box.

What we didn’t have forever was our love. Our disagreement on plastic wrap puckered in comparison to our inability to achieve a bilateral treaty on procreation. (Truthfully, we never really talked about having kids. Hank just drew an obvious conclusion as to my preferences based on the fact that I kept buggering off to Africa and other far reaches of the world.) I bought a condo, and Hank came along for a while, resentful that he wasn’t given input on the color scheme. I refused to acknowledge that the divergence of our paths was putting our union in grave danger. 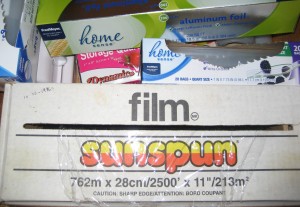 As sure as 2500 feet of plastic wrap lasts for 15-plus years, our relationship disintegrated. Hank moved to a small town and had babies with someone else, and I fell head over heels for a man who travels the globe with me and jokes about liking kids just fine, baked. Every time I open the kitchen drawer, though, there it is, and with a good 200 feet left on it. It’s my reminder of young love, and some happy times. It also brings a feeling of relief that Hank and I didn’t commit to the end of the roll.